Much of the story of Marimite revolves around the Yamayuri Council (Yamayurikai, lit. "Mountain Lily Council"), which acts as the student council. The Yamayuri Council meet in a building called the Rose Mansion. Located within the school, it consists of two stories, including a meeting room on the second story.

A Rose, or Rosa, is one of three senior members of the Yamayuri Council, although it is also possible to generally speak of all the members of the Yamayuri Council as roses. A Rose makes the important decisions within this group, since she has control over the student council. Candidates for the position, which lasts through the school year, are chosen through an election. Any student can run to become a Rose, although the position is usually given to the en boutons, the Roses' petite sœurs.

The petite sœur of a Rosa is called an en bouton, otherwise known as bara no tsubomi. En bouton is French for "in bud" — as used in the example Rosa Chinensis en bouton — and is unofficially considered part of the Yamayuri Council, as is the petite sœur of the en bouton, if she has one. The en boutons must be in a lower year than their oneesama, and generally the en boutons execute the plans discussed by the Roses, like assistants. Although the Rosa positions of the Yamayuri Council are traditionally passed to the en bouton on the graduation of the current holder, they are nonetheless elected offices which anyone may run for.

The Yamayuri Council is comprised of three rose families: 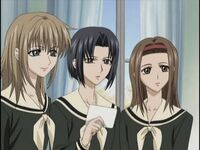 Add a photo to this gallery

Retrieved from "https://marimite.fandom.com/wiki/Yamayurikai?oldid=4319"
Community content is available under CC-BY-SA unless otherwise noted.